ZINEBI – INTERNATIONAL FESTIVAL OF DOCUMENTARY AND SHORT FILM OF BILBAO PRESENTS THE GRAPHIC IMAGE FOR THE 64th EDITION, PRODUCED BY CREATIVITY STUDIO HAPPYENDING

ZINEBI – International Festival of Documentary and Short Film of Bilbao—organised by Bilbao’s City Hall and which this year will be held from 11 to 18 November, presents the image of its 64th festival, created by Bilbao graphic design studio Happyending Studio, joining the list of local artists who have been creating the ZINEBI image in recent years.

For the 64th ZINEBI, Ángela Alonso Hernández and Elena Perea —founders of the Happyending Studio— have conducted a “search for innovative territories”, which they see as the essence of the Festival, with a focus on “ideas that embrace new narrative, formal and aesthetic experimentations.” This formed the basis for a graphics project directly inspired by “the tools of audiovisual creation” such as “test and focus cards”. They use these to extract “a universe of geometric shapes, colours and motifs enabling us to create” for the 64th ZINEBI “an eminently recognisable visual language, with direct links to the identity of ZINEBI”.

Alonso Hernández and Perea make use of this aesthetic conception to delve into “collective audiovisual concept libraries” to showcase ZINEBI through “small visual shorts” conveying the short films that are the backbone of the event: some portray “slices of daily life”, others depict “major personal or collective achievements, extraordinary events, mistakes or failures.” 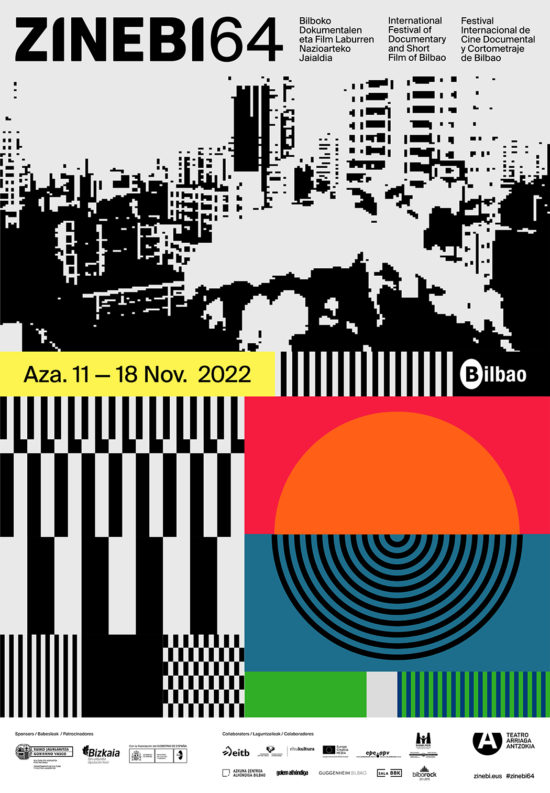 Happyending Studio was founded by Ángela Alonso Hernández and Elena Perea in 2012. It is an independent creative studio based in Bilbao, specialising in graphic design, illustration and artwork.

Both, Alonso and Perea, are Fine Arts graduates: the former worked on the executive programme on “Design and expansion of businesses in the creative sector” at the European Design Institute, and was responsible for the design and conceptualisation of spaces such as the Basque Country stand at Expo Zaragoza and the Interpretation Centre for the Segovia Aqueduct, among other projects; the latter completed her studies at London’s UAL and the Cake Design studio in Paris, before working as graphic designer for customers such as Hennessy, Le Royal Monceau, Roger Pradier, McDonald’s and Azkuna Zentroa, among others.

Both combine their work as designers with teaching work as lecturers at the IED Kunsthal Bilbao.

Happyending Studio joins the list of Vizcaya designers that have created the image of the International Festival of Documentary and Short Film of Bilbao in recent years, featuring Rebeka Arce, Eider Corral and Susana Blasco.