ZINEBI – Bilbao International Documentary and Short Film Festival – organised by Bilbao City Council, together with the Basque Government, Bizkaia City Council, and the Institute of Cinematography and Audio-visual Arts (ICAA) of the Spanish Ministry of Culture and Sports – has unveiled the image for its 63rd edition, created by Rebeka Arce. She joins the list of local artists who have created the image for recent ZINEBIs, which, this year, will be held between 12 and 19 November.

The graphic artist and art director from Bilbao has produced a series of fictitious flags for ZINEBI 63, created to represent the “non-places” – a supermarket, a shopping centre, a hotel room, an airport – where we related to other people during the different lockdowns we have had to face as society. Places with which people have a consumer relation.

According to Arce, “the transientness, uncertainty and space-time disorientation had to be reflected in the visual narrative” of a “system of infinite flags of the non-places, in contrast to the socially constructed single-flag perception”, for which “we use the generative design and programming language, working with Jannis Maroschek, the German designer residing in Tokyo”. 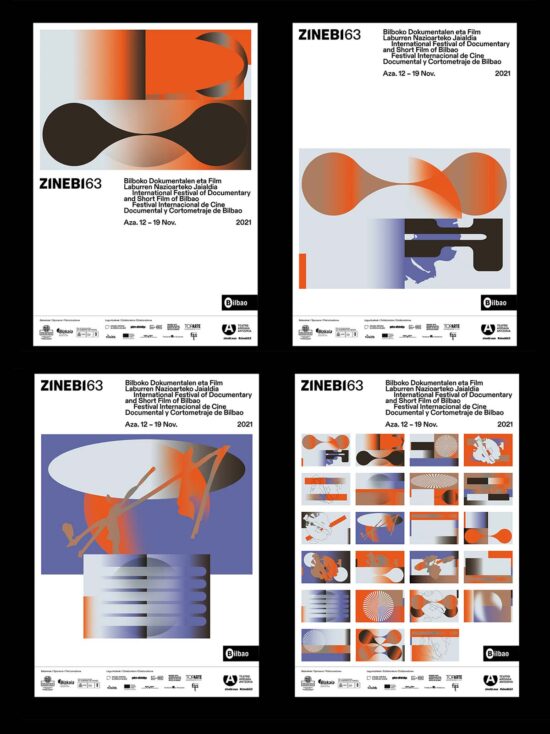 Rebeka Arce is a multidisciplinary designer and art director. Her philosophy based on translating concepts into a visual language and her passion for observation, synthesis and approach to future scenarios, has led her through different disciplines, with special focus on art direction, brand creation, visual identities and image construction for audiovisual media.

After working in different studios in Bilbao and Berlin, in 2013, Arce founded her own studio dividing her time between the German capital and Madrid. She works for clients in the sector of culture, arts, technology, fashion and entertainment around the world.  Her clients include leading cultural entities of the ilk of the Thyssen-Bornemisza National Museum Madrid (for whose ‘Anonymous, songs for an unknown character” graphic campaign Arce won the ADG Laus Silver Prize 2021), Instituto Cervantes, Matadero Madrid, Cineteca Madrid and GetxoPhoto Festival. She has also worked for other clients, including Sony Pictures, RedBull, Narciso Rodriguez, AXN, Sephora and Madrid City Council.

As well as working as a designer, Rebeka Arce teaches at schools such as IED Madrid, was a member of the jury for the ADG Laus Awards 2021, was nominated for the Gràffica Awards 2020 and has been a speaker at events including Brief Festival, Ladies, Wine & Design, Madrid Design Festival and PlayRestart.