THE 63RD EDITION OF ZINEBI ENCOURAGES THE PUBLIC BACK INTO CINEMAS

ZINEBI – The Bilbao International Festival of Documentary and Short Films closed its 63rd edition on November 20 with the screening in the Teatro Arriaga of the short films included in the list of winners, headed by the ZINEBI Grand Award granted to the Macedonian-Serbian film North Pole (Marija Apcevska, 2021) which was also the ZINEBI short film candidate for the European Film Awards 2022.

In an edition that was still marked by a global situation of uncertainty derived from the evolution of the pandemic, ZINEBI once again opted for a hybrid version of the competition to enable both the public who wanted to come to any of the cinemas in which the 70 in-person sessions took place (24 more than in 2020, but still 15 fewer than in 2019) as well as audiences who have not yet got back into the habit of going to the cinemas to attend. For the latter, the Festival offered them the possibility, for most of the days of ZINEBI 63, to access a broad representation of its programme on the online platform FILMIN. There, some of the films could be seen by users in their original version with subtitles in Spanish or in the Basque language—Euskera, through SVOD (Subscription Video on Demand) or TVOD (TV on Demand).

The total number of viewers counted by the organisation of the competition came to more than 16,500 and is still far from reaching the levels before the pandemic although it doubled the number of viewers at the 2020 edition.

In view of these figures, the ZINEBI organising team values the development of the 63rd edition positively and hopes that it will serve as an “initial step towards recovering normality”. Given the attendance data on the one hand and the data on the influence and repercussions of the Festival in the general and specialist mass media, they highlighted that the role that a “specialist and medium-scale” festival such as ZINEBI should play is that of offering “incentives so that the public can return to the ritual of going to the cinemas in the city, and this is what we have tried to do by means of a programme based on independent, quality films, artistically committed, and from all over the world”.

ZINEBI has highlighted its “commitment to Basque country films: for the fourth year running it awarded a grant of €10,000 to a full-length documentary made in Euskadi; it handed out grants to short films to the value of €9,000; and of all the films screened — short and full-length films— 45 Basque country productions could be seen.

BACK TO THE CINEMAS

Despite not yet being able to offer the sessions for children or the ZINEBI Express competition for young creators, in a clear commitment to get the Bilbao public back to the cinemas, the comprehensive version of ZINEBI —the in-person version— included 123 programmed films (of which 93 were shown for the first time in Spain). Many of these were presented in the cinema and to the public by those responsible for them: directors, producers, actors or production companies from Europe, America and Asia.

The two people awarded the Mikeldi of Honour this year: the German director Margarethe von Trotta and the Basque filmmaker Imanol Uribe, also came to Bilbao. They collected their awards at the opening and closing galas, respectively. The director of Marianne and Juliane (Die bleierne Zeit, 1981) —the first filmmaker to be awarded the Golden Lion at the Venice Film Festival— spoke before the public with the Navarra producer Helena Taberna; while Uribe did the same thing with the deputy director of the Spanish Film Library (Filmoteca Española), Carlos Reviriego after visiting the site of the former San Francisco Convent in Bilbao where the exhibition inspired by the producer Ángel Amigo and the Association of Basque Producers (EPE-APV) on the event of the 40th anniversary of the premiere of his first fiction film La fuga de Segovia (1981) was open to the public until Sunday 21 November.

Along with other filmmakers and artists, the filmmaker Enrique Urbizu met the Bilbao public and presented the book he jointly wrote with Carlos Gómez La caja de madera: Estudios sobre puesta en escena cinematográfica, presented by the director of the Basque Country Film Library (Filmoteca Vasca), Joxean Fernández; the winner of the 2021 National Award for Plastic Arts, Dora García – who, in a conversation with the artist Itziar Okariz presented her latest documentary If I Could Wish For Something (Si pudiera desear algo, 2021); and the local Mexican filmmakers Yolanda Cruz, Concepción Suárez, Itandehui Jansen (also a member of the jury for the International Short Film Competition) and Luna Marán who, along with the Mixe author and linguist Yásnaya Aguilar, presented the series curated by Yunuen Cuenca Focus: México, Mujer y Cines Originarios.

ZINEBI also enjoyed the participation in person of the Serbian filmmaker, researcher and artist Marta Popivoda who presented her most recent piece of work, Landscapes of Resistance (2021), at the Bilbao Museo de Bellas Artes; the San Sebastian actor and director Aitor Merino, who presented his most recent documentary, Fantasía (2021); along with a considerable group of filmmakers from different places in the world who presented their films to compete in the Official Section – ZIFF ZINEBI First Film, dedicated to first-time full-length films premiered during the current year; Fern Silva from the United States who, in the end was awarded the Grand Award of the competition for Rock Bottom Riser), the Mexican Diego Hernández (recognised with the Young Jury UPV-EHU Award for Los fundadores), the Korean producer Kam Jeong-won (The Train Passed By), the German filmmaker Caroline Pitzen (FREIZEIT or: The Opposite of Doing Nothing), the Argentine director Micaela Gonzalo (La chica nueva), Émilie Aussel from France (Our Eternal Summer) and the Slovene documentary maker Marija Zidar (Reconciliation). 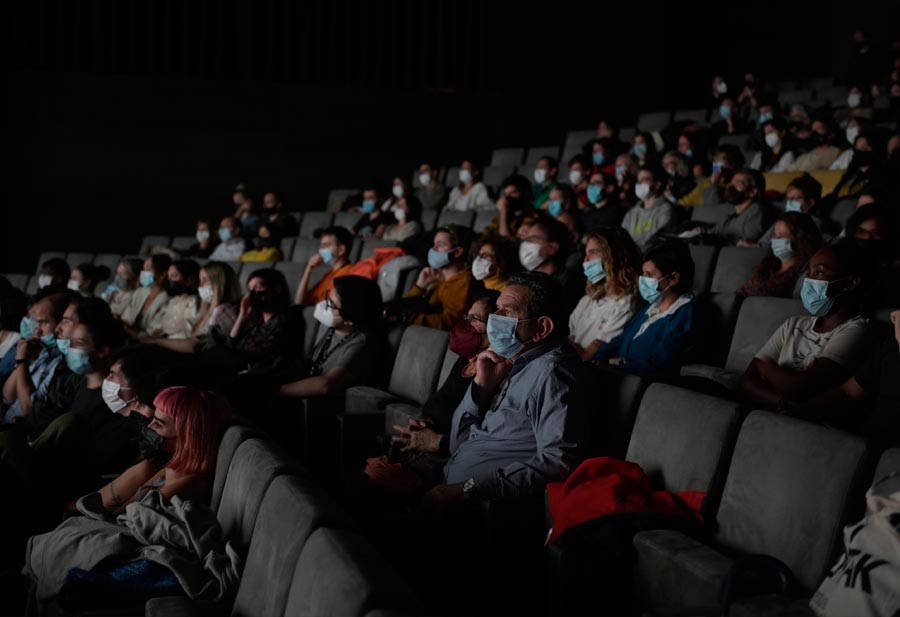 ZINEBI has also recovered its presence in its industry activities, which increased with respect to 2020 and previous years. Therefore, jointly organised with the Association of Basque Producers (EPE-APV) and in collaboration with ETB, Zineuskadi and Europa Creativa Desk MEDIA Euskadi, the fourth edition of the Professional Forum of Documentary Films ZINEBI Networking: Dokumentalen Sorgunea, took place, which ended up with the awarding of a grant of €10,000 for the full-length documentary project A los libros y a las mujeres canto, directed by Maria Elorza and produced by Txintxua Films (responsible for full-length feature films such as Amama and Dantza, both of which were directed by Asier Altuna; and Oreina, by Koldo Almandoz).

The festival also hosted two important meetings: on the one hand, the largest meeting of film soundtrack composers in Spain, at which the winners of the Goya Eva Gancedo (awarded for her score to La buena estrella, by Ricardo Franco) and Aranzazu Calleja (who won an award for the original soundtrack of Akelarre, by Pablo Agüero, jointly composed with Maite Arroitajauregi) participated, in addition to musicians such as Vanessa Garde (Rosa’s Wedding – La boda de Rosa), Zeltia Montes (The Good Boss – El buen patrón), Nerea Alberdi (Josefina), Paloma Peñarrubia (Seis y medio) and Paula Olaz (Nora). There was also the first meeting of European documentary film festivals, which brought together the directors and programmers of prestigious competitions such as DOK.Leipzig (Germany), Ji.hlava (the Czech Republic), Doclisboa (Portugal), Cinéma du Réel (Paris), DokuFest (Kosovo), FIPADOC (Biarritz) and Punto de Vista (Pamplona).

ZINEBI also held a meeting of the associations of independent audiovisual producers from Euskadi, Navarra and Nouvelle Aquitaine as part of the Zinema Zubiak project and hosted the public presentation of the short film projects developed by the participants in the first edition of the Aukera programme, aimed at women aged between 18 and 35 hoping to become professionals in the audiovisual sector, during which three grants of €3,000 were distributed to three different projects.

In addition to contributing to strengthening the local audiovisual industry, ZINEBI has a far-reaching network of institutional collaborators (in addition to Bilbao City Council and the Teatro Arriaga, the organisers of the competition) and private collaborators: The Department of Culture and Linguistic Policy of the Basque Government, the Provincial Government of Bizkaia, the Ministry of Culture through the Institute of Cinematography and of Audiovisual Arts (ICAA), Europa Creativa Media DESK Euskadi, EITB, the Fundación SGAE Consejo de Euskadi, DAMA, the University of the Basque Country (UPV/EHU), the Association of Basque Producers (EPE-APV), the Association of Basque Scriptwriters, Emakunde, the (H)emen Association, the Goethe-Institut, UNICEF, the Bilbao Museo de Bellas Artes, the Bilbao Museo de Reproducciones, Azkuna Zentroa, Cines Golem-Alhóndiga, the Spanish Film Library (Filmoteca Española), the Basque Film Library (Filmoteca Vasca) and the Cineclub FAS.